Sugar is a broad term used to describe substances that are sweet tasting carbohydrate foods. The above definition includes the following. 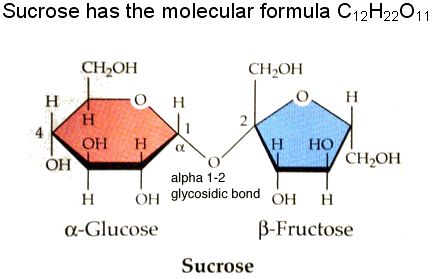 Sugars made up of one type of molecule, such as glucose (your blood sugar), fructose (often called fruit sugar) and galactose (part of milk sugar). Glucose is also known as dextrose.

Sucrose is extracted from sugar beet or sugar cane. The multi stage process that is involved in refining sugar also gives rise to a number of other sweet products such as treacle, golden syrup and molasses.

Syrup is a general term for any sugar solution.

Molasses is the residue left after an early stage of the production process. In the case of sugar canes, repeated boiling yields different products. After the first boiling you produce raw sugar crystals and cane syrup. After the third boiling you produce more raw sugar crystals and blackstrap molasses, which contains more vitamins and minerals than pure sugar as it contains more of the left over plant materials. In some cases you can get 20% of your daily requirement of calcium, magnesium, potassium and iron from a tablespoon of molasses.

In the production of white sugar from sugar canes, the raw sugar crystals produced by repeated boiling undergo a process called affination in which they are mixed with a pure syrup and then placed in a centrifuge. Centrifugation then removes the outer coating of the sugar crystals including many potentially nutritious gums, resins, vitamins and minerals. The crystals are then washed and turned into a syrup by boiling with water. This syrup can then be boiled. On cooling brown sugar crystallizes out leaving black treacle behind as the residue. Black treacle contains fewer vitamins and minerals than blackstrap molasses. Muscovado sugar is a type of brown sugar.

The syrup used to make black treacle undergoes purification in which it is mixed with either chalk or phosphoric acid. This makes the syrup more pure and lighter in colour. A further process of decolourization is then carried out in which the syrup is filtered to become even lighter in colour. This syrup is then boiled. On cooling white sugar crystallizes out leaving golden syrup as the residue. The loss of coloured materials means that golden syrup contains fewer nutrients than black treacle.

Sugar has been produced in large quantities for over 200 years. Other modern sweeteners are of much more recent origin. HFCS has only been widely consumed since the mid 1970's and was boosted when Coca Cola and Pepsi switched US production to using HFCS, instead of table sugar, as a sweetener for their drinks in the mid 1980's. HFCS comes in two main forms, HFCS-55 and HFCS-42 The numbers denote the percentage of fructose. HCFS-55 is used primarily in soft drinks. HFCS-42 is used mostly in baked goods and processed foods. Bizarrely HFCS-42 actually has less fructose than sugar, making a nonsense of its name!

There is a big debate about the health effects of HCFS, often focusing on its fructose content.

The sweetness of sugar is not measured by an instrument, but by comparing a sweetener or sugar with sucrose in solution. Sucrose by convention is given a sweetness of "1". This isn't an exact science as it involves the taste sensations of individuals in the laboratory. The sweetness not only varies between different people, but also with temperature, acidity, other foods/solutions consumed concurrently, and concentration.

The least sweet is possibly lactose "0.16", the one you drink as a baby. If you chew on bread for long enough the starch will break down into the sugar maltose, which has a sweetness of around "0.4". Glucose is only "0.8", while fructose is "1.2". If this seems at odds with the diagram then glucose syrup is actually another name for corn syrup which is only 90% glucose and contains other substances which bring its sweetness down to "0.35". Sweeteners are a lot sweeter than sucrose, typically around 100 times sweeter.

How does sugar affect health

Glucose levels are maintained within a tight range in the blood (4.2-6.4mmol/L - between meals). This is because too much glucose in the blood is dangerous and leads to the serious symptoms of uncontrolled diabetes. If glucose levels are too low we also experience problems such as tiredness, hunger, irritability and shakiness.

The extent to which a food disrupts blood glucose is measured by its glycaemic index (GI). Unlike sweetness which uses sucrose as the benchmark, GI uses glucose as the benchmark. A GI of 100 is equivalent to glucose. Sucrose (table sugar) has a GI of around 63 due to the fact that half of it is fructose, which has a GI of only 19.

As a general rule if you eat too much of a food with a GI of more than 60 you can expect some blood sugar instability. However, remember that if you mix your foods with other foods with a lower GI the overall effect on blood sugar levels can be reduced.

Sugar is digested and absorbed quickly. Too much at one time leads to a steep rise in glucose levels in the blood. Our body then secretes the hormone insulin, to move the glucose from the blood into the tissues, where it is not an immediate threat. However, if you consistently consume too much sugar (or any high GI carbohydrate food), then the sugar in your tissues is mainly converted into fat.

Too much sugar (or any high GI carbohydrate) at one time also can lead to fatigue in the hours following. The insulin used to control blood sugar clears too much sugar from the blood, leading to the symptoms of hypoglycaemia, which include tiredness, hunger, irritability and shakiness.

Sugar feeds the bacteria in the mouth with fructose. These bacteria called streptococcus mutans use the fructose to produce energy and lactic acid, which dissolves the tooth enamel leading to cavities. If you eat sugar in a sticky form that adheres to the teeth, the problem is exacerbated.

Where do I find sugar

Sugar is found as neat table sugar, but is added to a huge number of processed foods. Many of these foods you may not think of, as being sweet. It is also the case that most carbohydrate foods can break down into pure glucose. This is why bread, pasta, rice and potatoes can all lead to rapid rises in blood sugar levels.

There are plenty of products out there that have a healthy image, but that are full of sugar. I'm not a great fan of these products as people generally don't realise that they are consuming a lot of sugar and then allow themselves to consume more than they should.

Fruit juices range form 8.5%-16.0% sugar. That is one heck of a lot. Here is a table comparing a few of the more popular drinks.

So you can see that most fruit juices contain at least 10% sugar. I always advise my clients to water their fruit juices down 50:50 with water. This makes the drinks more effective at hydration and reduce their ability to destabilize blood sugar, which can lead to obesity etc etc.

When it comes to fizzy pop drinks they are of course no better. However, you will notice that they often contain less sugar. The drinks companies have reduced the amount of sugar and increased the amount of sweeteners over the last few years. This is in their own interests as sweeteners seem to create dependency "sweet tooth" even more effectively than sugar itself.

The healthiest of the above? It would be Sprite as this contains a sweetener, stevia, which is probably beneficial for health. The Schweppes tomato juice and soda water would be OK too.

Another dietary staple, touted vigourously by organisations such as British Nutrition Foundation and the British Dietetic Association. However, most cereals are a particularly bad way to start off your day. They are very high in carbohydrate and most contain high amounts of sugar.

I advise many of my clients to stay off cereals other than porridge. Porridge contains plenty of soluble fibre which ensures that the carbohydrate it contains is absorbed slowly, giving a steady stream of energy throughout the rest of the morning.

Yoghurt has a healthy image, but if you consume flavoured yoghurts then you are getting a massive dose of sugar each time. I've checked out Tescos, Waitrose, Onken, Rachel's, Muller Light, Shape, Weight Watchers and Activia. All these producers have flavoured yoghurts containing between 12 - 17% sugar. So 1/6th of your yoghurt is pure sugar!

When you find flavoured yoghurts with less than 12% sugar, remember that is more than coca cola 10.6%, then you will find that they have added artificial sweeteners. I find it mind boggling that Activia's cherry yoghurt, Shape's berry yoghurt and Muller Light's coconut and vanilla yoghurt all contain 9% or more sugar, and still see the need to add in sweeteners.

When it comes to yoghurt I always recommend that my clients use a natural yoghurt. These typically contain just yoghurt, while all flavoured yoghurts have a host of additives.  A natural yoghurt, whether full fat or reduced fat will contain between 5-9% sugar. For taste just add in seeds, nuts, cocoa powder or fresh fruit. It tastes much better than any flavoured yoghurt.

Sweeteners are artificial substances that stimulate the sweet receptors on our tongue. Unfortunately the majority of them are actually worse for health than pure sugar. However there are a few exceptions. I won't be able to do justice to the topic in this article, but here are a few thoughts about a few of the most common.

Another commonly used sweetener. Acesulfame K is 200 times sweeter than sucrose and usually used in conjunction with another sweetener such as sucralose or aspartame. It too is associated with negative side effects, similar to those of aspartame.

Possibly the worst of the bunch. Formed from methanol, aspartic acid and phenylalanine, various animal, clinical and epidemiological studies have linked aspartame with cancer(1), headaches and depression(2,3). Many studies give aspartame the all clear, but unsurprisingly the vast majority of these are industry funded studies(4).

Sucralose may be sweet, 600 times sweeter than sucrose, but it appears that pleasure centres in the brain know that they are being fooled. As a result appetite is stimulated more than with sugar(5). There is also concern that sucralose could increase the likelihood of inflammatory bowel diseases(6).

For once a sweetener that may not be harmful. Stevia contains 2 chemicals, stevioside and rebaudioside that are 300 and 400 times sweeter than sucrose respectively. Studies with stevia have shown it to be beneficial for blood sugar handling(7).

Xylitol is about as sweet as sucrose. Unusually for something sweet, xylitol is associated with protecting teeth from decay. It does this by breaking up plaque. Many dentists now advocate using xylitol chewing gum to fight decay. Plaque is what is known as a biofilm and xylitol is able to disperse biofilms throughout the body. So in addition to chewing gum you can also find xylitol nasal sprays, which are used in treating chronic sinusitis.

However, when consumed in excess it has a laxative effect. If you suffer with a gastrointestinal disorder such as IBS it is worth being aware that it could exacerbate symptoms.

For most people a small amount of sugar in the diet is fine. The problem is when people consume too much. I'd say one small sweet item per day is OK for most. If you exercise regularly you will be able to metabolize more, however the damage to your teeth will be the same as for sedentary people.

When it comes to sweeteners I'm not a fan. While stevia and xylitol are pretty harmless, most others can damage health. The cure for a sweet tooth is to stop eating sweet things, not to use sweeteners, which in many cases increases the dependency on sweet tastes.