Xylitol is equal in sweetness to sugar and as such can be used in much the same way. It has a similar appearance too. 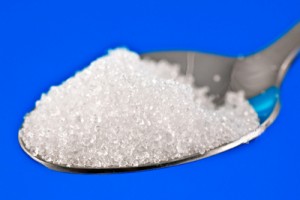 It is normally produced from a substance found in wood or corn, called D-xylose. This is further processed by yeasts or bacteria such as candida or saccharomyces, into the sugar-alcohol, xylitol.

Just in case you think this substance is foreign to our bodies, xylose appears as an intermediate substance in a number of processes in our body involving sugars. In particular the production of the gels (synovial fluid) that insulate our joints.

There is very good evidence that xylitol can prevent cavities. It is thought to do this by a number of mechanisms:

Xylitol is better than sugar, because the bacteria, streptococcus mutans, that cause cavities can't use it for energy. Many dental organisations advocate the use of xylitol chewing gum from between 3-5 times daily to reduce cavities(2).

Xylitol chewing gum has proven effective at preventing ear infections such as the common childhood infection, otitis media(3). A review of a number of intervention trials on children showed gum to be able to reduce the risk of otitis media by 41%. Gum proved more effective than either lozenges or syrup formulations for xylitol. The preventative role of xylitol is quite long lasting. Lower levels of cavity causing bacteria were found in kids many years after they stopped using xylitol gum(4).

It is thought that the ability of xylitol to break up bacterial biofilms, including those of streptococcus pneumoniae, may be responsible for the effect. There is even evidence that chewing xylitol gum may reduce the risk of pneumonia, one of the biggest killers next to heart disease and cancer(5). However the experiment was done on rats consuming about 15% of their calories as xylitol, not something that would be matched by chewing gum. Neither would it be healthy. Rats fed 10-20% xylitol in their diet were more likely to get cancer of the adrenal glands(6).

Many middle ear infections (otitis media)  are caused by the pneumonia bacterium. This same bacterium is responsible for many cases of chronic sinusitis. Antibiotics may not be able to clear all bacteria, especially those that can insulate themselves with a protective sticky matrix that they produce themselves, called biofilm.

There is a nasal spray that gets round this problem by using xylitol(7). Because xylitol can break up biofilms, it appears to help reduce the symptoms of sinusitis by dispersing the bacterial that cause it. Unlike steroidal nasal sprays it does not dry out the sinuses, rather it encourages the correct type of mucus secretion, which should carry the harmful bacteria away with it. The consensus among doctors treating sinusitis is that the nasal drops need to be used 3-4 times per day to have a meaningful effect(8).

If you look up health benefits of xylitol you will frequently encounter it being touted as good for diabetes control. It is likely that it is much better than sugar, but I don't think it should be seen as something that you should necessarily be taking if you are diabetic. The important thing in diabetes is to keep the glycaemic index of your diet low enough to match your metabolic need for sugar. You can do this without using xylitol.

Xylitol gets mentioned because it looks like sugar and can be used to replace it. If you want to use a sugar like substance and are diabetic you will benefit from xylitol, but why use neat sugar anyway?

Unfortunately xylitol is toxic to dogs and it is important to prevent them consuming any. A single gram of xylitol for a 10kg dog will provoke low blood sugar. More can cause liver damage and ultimately as little as a few grams can be life threatening.

Unlike dogs, humans can consume loads of xylitol, up to 430 grams daily without serious side effects(9). The only side effect of note is due to the laxative effect of xylitol, which is due to it being a sugar-alcohol. Some people are more prone to this than others, but using sensible amounts below 20g per day should be OK for most people. There is evidence that your guts adapt to xylitol over time and some manufacturers suggest starting out with less than 8g per day and increasing the volume slowly.

Xylitol appears to be safe and reasonably healthy. I would consider its use justified for kids with otitis media, and people with cavities. Especially if the alternative is taking preventative antibiotics. Having said that the thought of infants chewing all day may not appeal. I would also consider it worth trying the nasal spray for those with chronic sinusitis. Please let me kno if you have any success with this product.

However, as a general sugar substitute, and in diabetes management I'm not so keen, mainly because I don't believe sugar substitution is generally a good idea. My main concern is that by using it as a sugar substitute, people are not addressing the real problem that many have, namely a overdependence on sweetness.