Chronic diseases are common in the 21st century. However, with different lifestyles their incidence could be drastically reduced. Even when a chronic disease is already present it is possible to reduce the level of symptoms by changing lifestyle.

What are the chronic diseases that affect us in the 21st century?

Some chronic diseases are almost entirely genetic in origin, that is they would occur whatever lifestyle you or your parents led. Others occur as a result of exposure to infectious disease and again are unavoidable once you've been unlucky enough to contract the initial infectious disease. However most chronic disease is avoidable and occurs as a result of the lifestyles that we lead nowadays.

Chronic diseases with a genetic origin and their incidence per 1000 people.

All these diseases come with different degrees of severity. While they are listed as being genetic in origin some have an environmental components. For instance otosclerosis has been linked with measles. These diseases are relatively rare.

Some of these disease affect us from early childhood e.g. Cystic Fibrosis, while other have an adult onset e.g. Huntingdon's disease. Either way it is normal to know one or two people who are affected by genetic disease. While they could not have avoided it, they can normally do something to minimise their symptoms by following the best possible lifestyle.

Most infections resolve completely after a period of time, some kill, especially in people without robust immune systems. There are others that leave a lasting imprint on their hosts, us. Some of these diseases are well understood while others are not. Throughout time new infectious agents evolve and so the list of diseases changes over time. Some of note are listed below.

It is worth noting that infectious disease was virtually unknown until 10,000 years ago when man started settling down in farming communities. The close association of man with domestic animals and larger groups of humanity gathered in one place, enabled pathogens to spread more easily.

Chronic disease resulting from lifestyle choices and incidence in the UK 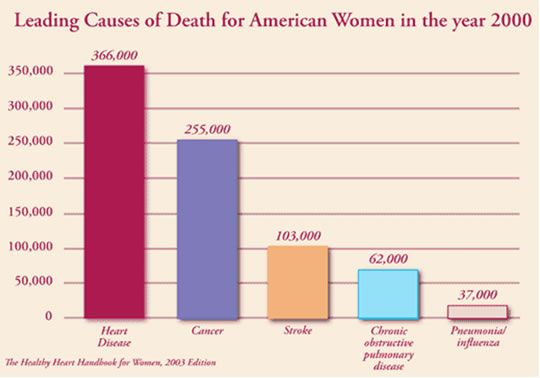 The environment we live in nowadays is drastically different from that which we evolved in. Humanity has been around as a species for about 200,000 years and yet it was only 10,000 years ago that we first settled down into farming communities. The changes in our diet that followed the agricultural revolution and then the industrial revolution 200 years ago have caused a massive rise in heart disease, cancer and diabetes. Evidence from DNA analysis of skeletons over 10,000 years ago shows that these 3 major diseases were extremely uncommon in our hunter gatherer forebears. Evidence from the few hunter gatherer tribes left in the wolrd since the beginning of the 20th century also indicate that those over the age of 45 rarely succumb to heart disease and cancer.

Looking directly at the death statistics for the UK one thing soon becomes clear. Don't smoke or drink to excess if you want to live a long healthy life. Yes I know that is obvious, but it really struck me as I moved down the age categories for mortality how the most common cause of death became increasingly related to smoking and alcohol abuse. None of the top 5 leading causes of death age 85+ are particularly related to smoking or alcohol abuse. Move down to the 60-65 age category and suddenly half of the causes of death are very clearly related to smoking and drinking with lung cancer, oesophagal cancer and chronic pulmonary obstruction featuring. Diet can help improve health a huge amount, but if you smoke and drink to excess you are doing more damage to your body than you can recoup even with the best possible diet.

What changes in lifestyle help us avoid chronic disease?

Follow the following rules and for most people, you will not go far wrong.

1. http://www.geneticalliance.org.uk/education3.htm   I used this for a list, but this charity had duplicated classifications and questionable figures. I amended them based on wiki research.