It has been argued that in the stone age our ancestors survived often with very little salt(1). However, there were abundant sources of salt for those who lived by the sea or who consumed the organs and blood of prey animals. How much salt most people ate in the stone age can only be inferred by assessing what their diet was, and calculating its salt content. Given that many humans lived close to the sea or saline lakes for much of their prehistory, it is quite likely that a proportion ate plenty of salt. Others living inland would have had very little. This is why, as I discuss later on, most people have inherited a good capacity to maintain good health at a wide range of salt intakes.

When man began growing his own crops the amount of salt consumed may have changed as grains, which contain little salt, displaced fruit and vegetable products in the diet. It was around this time that sources of pure salt were actively sought for purposes of food preservation and additional flavour. Salt consumption probably peaked in the Western world about 100 years ago when it was one of the only ways to preserve foods.

In the UK sources of salt were often denoted by place names ending in "wich". Many of these are in Cheshire which contains the towns of Northwich, Nantwich, Leftwich and Middlewich. The word sandwich is named after the Earl of Sandwich. Presumably Sandwich was a place originally associated with salt in some way. Nowadays most sandwiches contain a lot of salt unless made with home made bread.

Chemically salt is called sodium chloride as it is made up of sodium and chloride ions. These split apart in our body, which helps it fulfill a number of different roles.

What salt does for us

Let's be clear. You need salt to survive. Those who spend all their time maligning salt are in danger of forgetting that it is a vital nutrient. It fulfills a number of key roles in our body. Fluid balance, nerve transmission, stomach acidity and nutrient absorption are the four most notable. There is more information about these vital roles of salt here.

Can I consume too much?

The human body is designed to control the amount of salt we retain and it is pretty good at this. Consider the Japenese who consume very large quantities of salt. They currently have the longest average lifespan in the world(2). That does not mean excess salt is good for you, but it does indicate that for many people excess salt consumption is not deadly. A conclusion that many may find hard to reach after reading some of the messages from the public health authorities.

The reality is that we have a number of feedback systems within our body that help us adjust for widely differing levels of salt intake. A description of these systems can be found here.

How to understand salt levels

Measurements of amounts of salt can be confusing. 5g (grams) of salt can also be displayed as 2g of sodium. This also equates to 1 teaspoon or 100mmol. 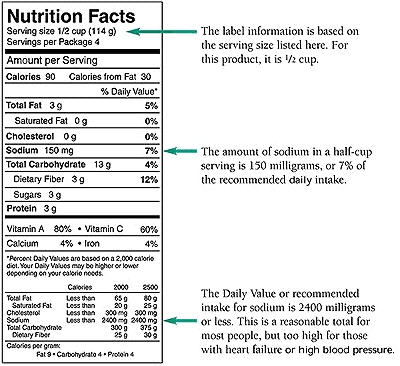 In the UK food labels currently can show both amounts of sodium and amounts of salt. By next year, 2014, they should be showing just levels of salt. Salt in this context means sodium chloride.

Some labels will show you a daily value or recommended intake for sodium. The traffic lights system used widely on supermarket produce also uses these values, their red, amber and green values are based on: red greater than 0.6g of sodium / 100g; amber greater than 0.1g of sodium / 100g and green below 0.1g of sodium. These figures, like all guideline amounts can be taken with a pinch of salt! If you have a specific disease which means you need to monitor salt intake then just look at the total amount of salt. If not, then in my view the traffic lights system is a waste of your time. Red does not necesarily mean unhealthy, and green does not necessarily mean healthy, it all depends who you are and what else you eat and drink.

There have been plenty of studies looking at the long term effects of different salt intakes. Many of them have been contradictory. This is partly because it is notoriously difficult to accurately measure and control how much salt people are consuming over the long term. However when you look at all the evidence, it seems that for most people the amount of salt they consume is unlikely to affect their health.

More analysis of the effects of salt on blood pressure, cancer, osteoporosis, kidney stones, heart health and sports performance can be found here.

How much salt should I have?

The average amount of salt consumed in the US and UK is around 9g per day. Men consume more than women on average. The recommended daily amount currently stands at 6g. Here is a list of some levels that are advised or consumed daily:

As can be seen a huge range of salt intakes are consumed worldwide. However, more recent evidence has emerged suggesting that there may be an optimal level for the population as a whole(3). This epidemiological evidence surprisingly suggests that the amount required for reduced risk of cardiovascular illness and death is in the range of 10-15g per day of salt. That is more than the average consumption in the UK and US. Consumption of amounts below 7.5g of salt per day were associated with increased incidence of heart failure and death from cardiovascular events. Amounts above 17.5g per day were associated with more cardiovascular events such as stroke and heart attack.

I have to say I don't agree with the strident messages from the health authorities exhorting us to reduce our salt intake to less than 6g per day. The evidence that amounts greater than this are harmful to most peoples health, is to say the least, flimsy.

On the other hand I also find the suggestion that it is inherently unhealthy to eat less than 9g of salt per day highly suspect.

There is no doubt in my mind that people undertaking strenuous activity, who lose a lot of salt in their sweat should not stint on their salt intake. In this context it can be a life saver. Also, older people and people on a range of drugs may have a need for more salt to avoid potentially lethal episodes of low blood sodium.

For those without specific health problems who are not losing a lot of salt there is no need to worry about salt intake. You should generally avoid packaged foods and junk food, but for reasons other than salt content. If you fancy some olives, cheese, ham or marmite then that is fine.